The secrets of the Tsingy 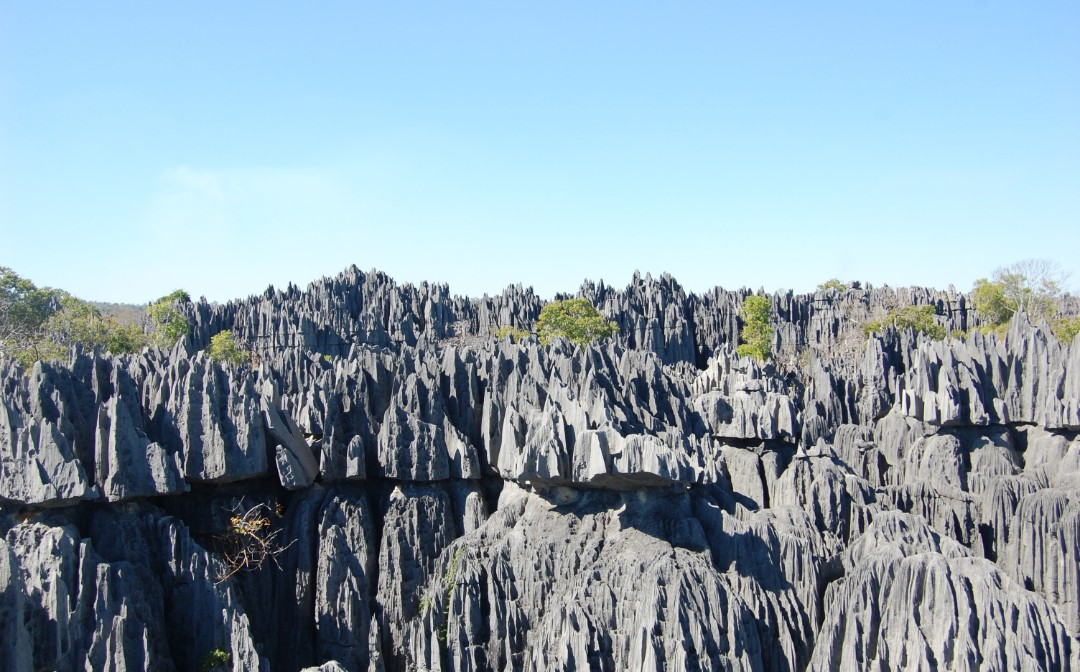 Imagine a landscape of towering stone peaks, crowded together along the horizon in every direction like some mysterious city on an alien planet. Many are giants the height of skyscrapers, all razor-sharp and tightly squeezed together leaving only narrow paths and causeways on the outskirts of an impenetrable interior. This is not the vista seen in an episode of Doctor Who, it is the Tsingy de Bemaraha Strict Nature Reserve of Madagascar, the largest tsingy forest in the world.

The tsingy began to be formed two hundred million years ago when the remains of seashells, plants and other marine life were crushed beneath the weight of the sea and squeezed into beds of limestone. When the waters receded about 5,000,000 BC the remaining rock was left at the mercy of the rain which slowly ate away at it, stripping and sharpening it, creating rocketing peaks and hidden valleys between.

These extraordinary forests of limestone needles have been places of mystery and wonder for so long as man has inhabited the island. It is typical of Madagascar and its worlds within worlds. In a land where so much that is living is found nowhere else, the same is true of the landscape. This apparently barren environment was once home to the first humans to occupy the island, known as the Vazimba. It’s believed they came here from Indonesia two and a half thousand years ago. Much of the island’s folklore and customs, oral history and legends of the supernatural revolve around these people. They lived on fruit and other forest fare and their kings used a local mushroom to dye their hair red as a sign of their royal status. The Vazimba brought the tradition of ancestor worship and Madagascan burial traditions to the island. They left few traces, apart from a number of tombs which can be glimpsed from boats on the river as you will see on your Avventura tour at Manambolo Gorge, where skulls and bones remain. So elusive are these original tsingy-dwellers that some on the island believe they were not human but monsters with elongated faces, large lips and fangs and that they were repelled (as many European spirits are said to be) by salt. Beware of what you bring with you on your canoe as it is also forbidden to bring garlic or pork close to a Vazimba tomb and to do so will incur their wrath.

It’s hardly surprising that a race capable of surviving within such a stone forest should be regarded as somewhat other-worldly. In Malagasy, tsingy translates as “where one cannot walk barefoot,” but the lack of human intrusion for many unexplored square miles does not mean this is a dead landscape – far from it in fact. On this island where so much of the wildlife can be found nowhere else on the planet, the tsingy forests themselves contain their own ecosystems quite distinct from the rest of the country. In fact whole separate populations of plants and animals have been discovered at different heights on the same peaks. It’s by no means an exaggeration to say that virtually every scientific investigation of the area reveals new species, previously undiscovered. Beneath the great stone towers and deep out of sight there are tunnels and caves stretching for miles, carved out by groundwater as the land above was sculpted by rain.

The tsingy forest is split in two between the Grand Tsingy and the red stone Petit Tsingy. To explore them you must follow a trail of cables and ladders and dramatic bridges strung from the sheer side of one canyon to another. The interior is so very dark as the peaks huddle closely together to shut out the possibility of sunlight. But there is a way to the top and your expert Avventura guide will take you to what has been described as the New York skyline of the natural world. Laid out before you is a stony labyrinth of towers and spires while below are intersecting avenues of myriad shades of green and the occasional tree-filled clearing.

You will never see anywhere like the Tsingy Forest on this world and it’s one visit we promise you will never forget.