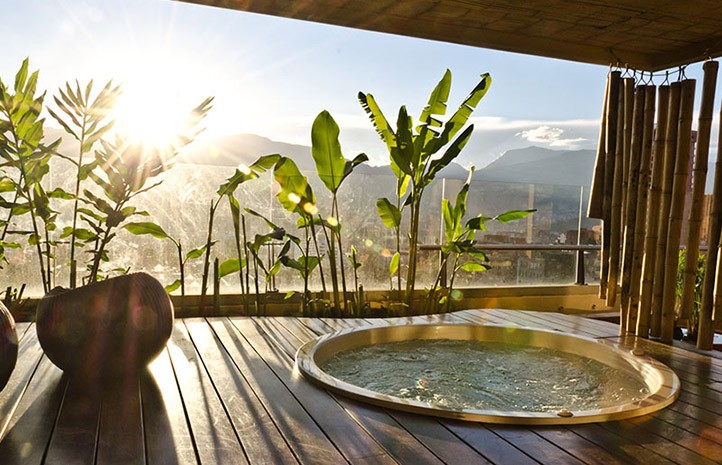 Colombia is an unspoilt paradise waiting be discovered by discerning travellers. It is a country of many contrasts from cities perched atop the mythic Andes Mountains to the dense, verdant jungles and the open plains of Amazonia. Colombia is a land of colour and breathtaking variety. It is a fusion of climates and cultures, lying as it does where the Pacific Oceans meets the Caribbean Sea.…

+ Click to read more
The beauty of the land is matched by that of the abundant flora. The rich, fertile soil and the generous warmth of the tropical climate sun make perfect conditions for producing the nation’s most famous export; coffee. Farmed using tried and trusted traditional methods the nation’s veins run thick and sweet with the treasured brew.
Magic abounds from Andean mountain top through the dark and secretive rainforest and the all-knowing ancient Amazon River. Lazy palms sway over endlessly inviting beaches with the mountains providing a majestic backdrop. Such is the profusion of Colombian plant and animal life, naturalists say it is the second most biodiverse country in the world. Giant soaring Wax palms climb up to two hundred feet providing homes for toucan, eagles, and bewildering varieties of parrots.
So close to the equator, the seasons run imperceptibly, one into another meaning temperatures barely change from month to month. The higher you go the cooler it gets. Colombia’s tallest peaks climb to almost 19,000 feet – nearly five times the elevation of Britain’s loftiest mountain top. The most noticeable seasonal difference is measured in rain drops; December to March is the rainy season but even then, elevation has a far greater impact on the day’s weather than the calendar.
The country is named for Christopher Columbus who first came here in 1499, seven years after his fateful discovery of the Americas. The country endured Spanish rule until the early nineteenth century when the first tentative steps were taken to gain independence from its colonial masters, with the country which appears on maps today finally taking shape as recently as 1903. Colombia’s people are as diverse as her land and nature comprising a remarkable eighty-five different ethnic groups.
After years of internal conflict, Colombia is now stable and relatively prosperous and the people are justly proud of the advances made. Without doubt, now is the time to visit before tourist numbers inevitably take off. We love this country at Avventura and believe it to be one of the most attractive destinations in the region. With a fully functioning infrastructure and some stunning destinations and accommodation this previously hidden gem is ready to be discovered, but don’t leave it too long.
That Colombia is best known for its coffee is due at least in part to the religious devotion of the people. The Catholic Jesuit order came to preach the word in the early eighteenth century and brought a few seeds with them to cultivate in a small way. Then a parish priest, Father Francisco Romero hit upon an enterprising and refreshing idea while hearing his parishioners’ confessions in the little town of Salazar de la Palmas. Instead of insisting on the recitation of three Hail Marys and two Lords’ Prayers for penance, he sent the absolved sinners off to plant two or three coffee plants. Luckily for us it would seem there was sufficient sinning going on for a mighty industry to grow and thrive.
Half of Colombia is shrouded in jungle but most of the people now live beyond its leafy fringes. The first inhabitants arrived from the north about forty-five thousand years ago. Early evidence of man’s presence is found in the form of majestic ancient ruins predating the Incan empire and includes more modern and equally beautiful buildings from the colonial era. Bogotá is the most colourful and captivating of capitals renowned for the fine galleries and museums and bold street art to be found in its elegant cobbled streets.
The culture and cuisine, the clothing and the styles of construction are testament to the country’s wide variety of influences from indigenous people to former European colonists and from Africa to Arabia. Let Avventura Travels be your guide to this unspoilt land. Come to see its beauty and intrigue and meets its warm and welcoming people, before everybody else does.

Colombia will astound and delight you with mountains of ancient gold and an entire cathedral hewn from a disused salt mine. Former colonial splendour mixes with the vibrant colour and light of indigenous art and the world’s finest coffee, cultivated using centuries old traditional techniques in the most beautiful tropical surroundings.

From the world renowned art and antiquity collections of Bogotá to the vibrant street art and glittering nightlife of Medellín, this fascinating country radiates culture. Relax on palm-fringed beaches of golden sand set against a tropical backdrop and explore the diverse flora and fauna of the Sierra Nevada foothills.

Colombia’s climate is determined by regional rather than seasonal differences and when it is dry in one region it can be wet in another.

Bogotá, in the eastern part of the Andes, has a fairly consistent temperature due to its proximity to the equator, with December, January, July and August being the drier months. Due to its altitude, night time temperatures drop more significantly in the Coffee Region whilst Cartagena’s beaches are busiest from December through to April when it is dry and sunny.

The Colombian Amazon’s wet season is from December to June and explorations by boat are better at this time. It’s also a great time for birding. From July onwards, the water levels start to recede and this is when mammals start to congregate by the tributaries and lakes.

Los Llanos is a year round destination and there are different experiences to be enjoyed dependent on the season. The wet season is from April to November and the scenery changes quite dramatically as the plains flood and turn green. It’s a good time to see the aquatic bird life. From December to March during the dry season, the temperatures rise and this is a great time to explore the area by foot or on horseback.