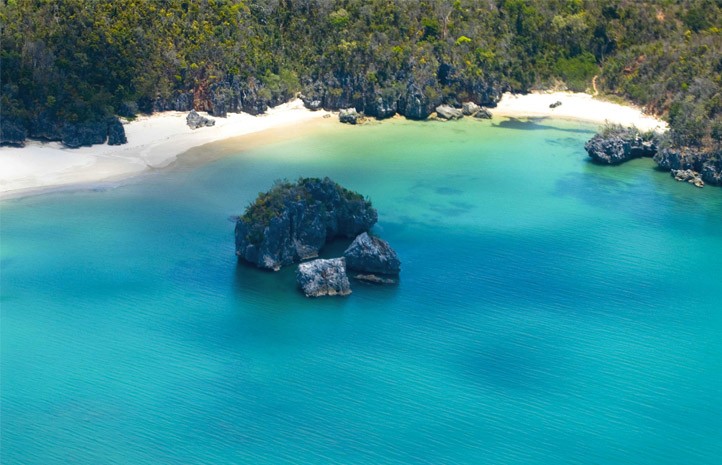 Madagascar sits alone three hundred miles from the coast of Africa. This splendid isolation has allowed the island’s plant and animal life to evolve along entirely different lines from anywhere else in the world, in fact most of the myriad life forms which make Madagascar their home is not found anywhere else in nature.…

+ Click to read more
Most of the great beasts of the Dark Continent are absent but instead there are tens of thousands of birds, orchids and of course, lemurs. In many ways the beautiful landscapes are as unfamiliar as the natural inhabitants, and it’s no exaggeration to say there is nowhere quite like it on the planet.
Of all the weird and wonderful organisms to be found here the ones most widely associated with the island are of course the lemurs. There are a hundred and seven different species known today; many others are now extinct but new varieties are still occasionally discovered, highlighting just how much about this incredible place there is still to learn. Even within the lemur family there is remarkable variation. The largest, the indri lemur, can grow to three feet tall and weighs in at up to twenty-two pounds, looking like nothing so much as a black and white tufty-eared teddy bear. By contrast, Madame Berthe’s mouse lemur would fit in the palm of your hand and weighs little more than an ounce. Fossils have been found of a species that would have towered over the indri, something akin to a gorilla in size.
One of the best places to really begin to understand the scope and scale of Madagascar’s incomparable wildlife is Mantadia National Park which boasts numerous kinds of lemur including the indri, diademed sifaka, grey bamboo lemur, red-bellied lemur and white-ruffed lemur. Here are tall, dense, wild forests looking today as they have for many thousands of years. Here unique bird species like the scaly ground roller, the pitta-like ground roller and the breasted coua also make their home. By day and night, the forest is alive with the large and the small, from ancient baobab trees to hairy crabs and the majestic fish eagle the glory of nature is all around.
With eighteen hundred miles of coastline glorious beautiful unspoilt beaches are everywhere. Swimming and snorkelling among the coral reefs, teeming with life, one wonders what the first settlers made of this strange paradise. Madagascar supported no human life until perhaps two thousand years ago and some historians believe it was discovered even more recently than that. The first inhabitants probably found their way here from Indonesia across an astonishing five thousand miles of ocean, to be followed by people from Africa. A combination of trade and curiosity has brought people from more than twenty different cultures here to live, and Malagasy culture and society is a glorious hotchpotch of traditions.
For centuries, rival chieftains vied with each other for supremacy until an island-wide monarchy was eventually established. European traders had to run the gauntlet of Malagasy pirates for many years as French and British diplomats competed for the king or queen’s favour. The French eventually made the kingdom a protectorate in the 1890s but the fiercely independent people were always troublesome for their colonial rulers, not taking well to outside control. For their part, the French found local culture and tradition incomprehensible, especially the unique custom of “famadihana.” By this widespread belief, local people celebrate and commemorate their ancestors by fetching them from their tombs, in most cases once every seven years, for a celebratory party. Eating, drinking and singing accompanies the ritual of rewrapping the bodies of the dead while having lengthy and meaningful conversations with them.
Independence from France came less than sixty years ago and this largely agricultural nation is the eighth poorest in the world. The growing tourism industry is providing an economic lifeline for many people in a country where almost half the population doesn’t have enough to eat. However, poverty does not seem to fuel resentment and visitors will find an incredibly warm welcome here where a smile is always appreciated and hospitality is considered a sacred duty.

Home to lemur, chameleon, fossa and a stunning array of birds, you will be captivated by the unique natural wonders of Madagascar. The “eighth continent” has lush rainforests, luxurious lodges and endless miles of sandy beaches making this mysterious island an unforgettable haven of tranquillity and discovery.

Madagascar is a vast county and weather conditions can vary across the regions. The main wet season is from December through to March, hence our departures avoid these months. Much of Madagascar’s wildlife can be seen year round, with humpback whales off the coast from July through to September and an abundance of baby lemurs in October.