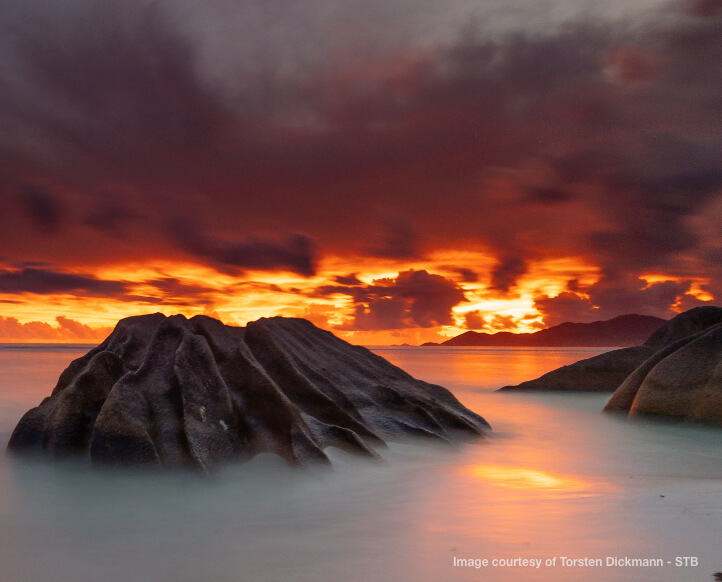 The Seychelles is a spectacular archipelago of 115 granite and coral islands that span over 1,800 kilometres to the east of Africa. With a mix of African, European and Indian influences, the Seychellois are a colourful, welcoming people that have nurtured a vibrant yet tranquil culture.

From private cruises to uninhabited coral islands to guided hikes along the picturesque trails of Silhouette Island or just simply kicking back and soaking up the sun with a fresh cocktail in hand, your every wish will be granted by this wonderful country.

This wonderful family-friendly property faultlessly blends its spectacular natural surroundings with all the luxurious modern day comforts you would expect. Superb water sports facilities, a fabulous spa and a choice of five restaurants add the important finishing touches to this exceptional retreat.

This tiny exclusive island with its immaculate white sandy beaches and stunning endemic flora and fauna, is the epitome of luxurious seclusion. With a heavy focus on sustainability and conservation, this stunning sanctuary is perfect for couples and families to not just relax but to immerse themselves in the unspoilt natural riches of Seychelles’ island life.

The two main seasons in Seychelles are influenced by the prevailing trade winds.

South east trade winds – May to September – Between May and September steady winds blow from the south east bringing drier weather and lower humidity. Rough seas can affect some beaches on the south western coast of Mahe and there can also be a buildup of seaweed on the western coast of Praslin. It’s not the best time for boat crossings between the islands so you may prefer to fly between the islands instead. The plus point about the south east is that any rain is usually light and does not last long.

North west – November to March – Light winds blow from the north west and most beaches have safe swimming but this is also the wetter season in Seychelles, particularly December and January. Despite the fact that Seychellois sometimes call this time of year the “north west monsoon” these are not like rains during the monsoon in India or Asia. In Seychelles showers tend to last only a few hours rather than days. In addition, Seychelles lies outside the cyclone belt that affects the southern Indian Ocean in February and March.