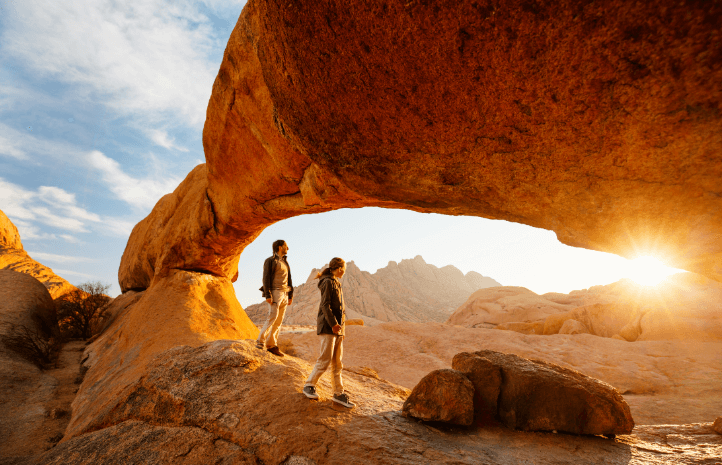 Stunning landscapes, world-renown game viewing and some of the best examples of South African prehistoric rock art are but a few of the compelling reasons to visit this astonishing country.…

+ Click to read more
Humans have inhabited the lands now known as Namibia since prehistoric times. In Damaraland, bordered on the west by the Namib Desert and the Kalahari Desert on the east, Twyfelfontein is a spectacularly scenic area, featuring one of the largest and most important concentrations of rock art in Africa. The name Twyfelfontein translates to “Fountain of Doubt”, which refers to the perennial spring situated in the impressive Huab valley flanked by the slopes of a sandstone table mountain. It was this spring that attracted Stone Age hunters over six thousand years ago that created an extensive collection of rock engravings and paintings.
In 1883, a German trader, Adolf Lüderitz bought a small bay on the coast. Having grown the area through trading with the local chiefs, he transferred ownership to The German Imperial Government in 1884 immediately declaring South West Africa a German protectorate. Years of bloody wars with the locals ensued until 1915 when the country was occupied by South Africa. This was followed by years of rebellion and political manoeuvring until in 1990 Namibia finally achieved independence. The cultural and architectural legacy of the German occupation remains to this day.
Stretching from the Swakop River to southern Angola, the Skeleton Coast is known as the ‘Land God Made in Anger’ and is remoteness at its best. Thousands of miles of sandy desert dotted with shipwrecks meet with the cold waters of the Atlantic and somehow an amazing array of wildlife and flora manages to survive in this harsh but beautiful environment. This otherworldly area is home to a diversity of wildlife including seabird colonies, Cape fur seals, zebra, gemsbok, desert-adapted elephant, lion and much more. Surfing enthusiasts are drawn to the powerful waves and photographers flock from around the globe to capture images of shipwreck graveyards and for the unrivalled maritime photographic opportunities.
Set on Namibia’s spectacularly scenic coast, the seaside town of Swakopmund is known for its wide-open avenues, colonial architecture, and its surrounding desert terrain. Swakopmund is the capital of the Skeleton Coast and has a quirky mix of German and Namibian influences, adventure options, laid-back atmosphere and cool sea breeze.
To the north of the country the world-renowned Etosha National Park, is known as one of the most accessible game reserves in Southern Africa. Etosha boasts vast open plains scattered with semi-arid savannah grasslands dotted with watering holes and secluded bush camps. An impressive five thousand square-kilometre salt pan makes up a large area of the eastern side of the park and can even be seen from space. This remote area teems with wildlife such as lions, elephants, black rhinos and giraffes, as well as a variety of birdlife featuring flamingos, ostriches, eagles, hornbills, and owls.
Located in the scenic Namib-Naukluft National Park, Sossusvlei is where you will find the iconic red sand dunes of the Namib. The clear blue skies contrast with the giant iconic red dunes to make this one of the most scenic natural wonders of Africa. Sossusvlei is home to a variety desert wildlife including oryx, springbok, ostrich and a variety of reptiles.
Less than three hours’ drive from Windhoek, the Erongo Mountain Range stretches across the plains between the towns of Omaruru and Karibib and is home to a remarkably rich natural heritage. This expanse of rugged wilderness serves as one of Namibia’s most popular tourist drawcards, attracting visitors with its spectacularly scenic landscapes, magnificent caves and rock paintings and an impressive array of wildlife species. These include, rhino, elephant, cheetah, leopard, giraffe, wildebeest, impala, blesbok, waterbuck, kudu, warthog, mountain zebra, oryx, eland, springbok and over 200 bird species.
Namibia is an incredible country that inspires, delights and surprises in equal measure.

With spectacular landscapes teeming with wildlife, Namibia is one of Africa’s best kept secrets. Add in some of the best prehistoric rock art on the continent and the wild red rock mountains and petrified forests, Namibia will delight with its smorgasbord of sights, experiences and adventures.

Namibia in its finest and most luxurious splendour. Staying in the most breathtaking lodges, your fly safari will showcase the dazzling range of game in Etosha National Park, the desert-adapted wildlife of Twyfelfontein, the otherworldly natural landscapes of Sussoslvei and the raw beauty and eclectic culture of the Skeleton Coast.

Explore the rugged beauty of the volcanic Erongo Mountains with its rich array of rare game including the critically endangered black rhino. Journey through some of the most spectacular landscapes from the wooded and thorn-scrubbed savannahs of Etosha to the desert wilderness of Damaraland – “the” definitive bucket list road trip.

Namibia has a sub-tropical desert climate that is very dry and agreeable. The coastal regions are cool and free of rain for much of the year. Inland there is more rainfall during the summer months where temperatures can soar to over 40⁰C during the day with cool nights. There are two main seasons; winter/dry (May to October) and summer/rainy (November – April). The dry season is generally considered best for game viewing with the rainy season less busy and from March onwards excellent for bird spotting.