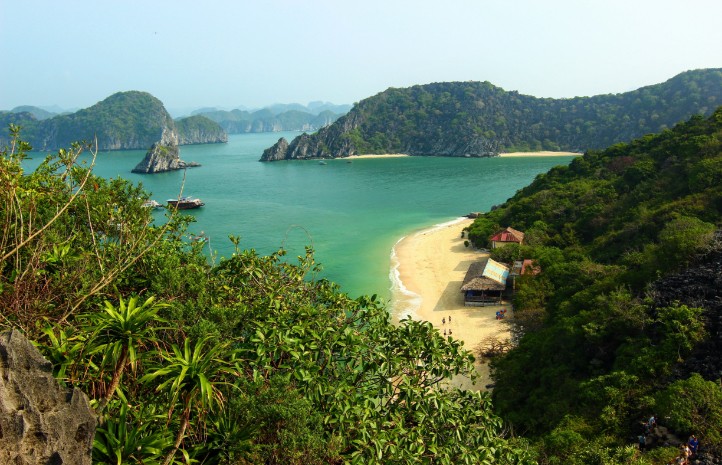 If you’ve never been to Southeast Asia before, little can prepare you for the sheer difference between Vietnam and Cambodia. Vietnam’s mysterious coastline and verdant mountain ranges contrast with its high-speed cities, enigmatic temples and beautiful colonial buildings. Cambodia is tranquillity itself with its ancient floating villages and the incomparable Angkor Wat.…

From culture to cuisine, from the deeply spiritual to the wild glory of nature, Vietnam will take your breath away. Take a seaplane to Lan Ha Bay and cruise the majestic Mekong River to find peace in a land shaped by war. The sights, tastes and smells of Vietnam will be with you forever.

Colonial splendour meets the culture of centuries. Discover Cambodian civilisation at its most glorious in the legendary Angkor temple complex and at its most chilling in a former Khmer Rouge prison. Swim from gleaming white beaches and explore the traditional floating villages of this land of beauty and wonder.

Vietnam
Vietnam’s climate is as diverse as its landscapes with different seasons across the country. From March to May, the weather in the north is generally warm and dry with the rainy season starting in June. Humidity and heat can be high between May and October, with temperatures cooling off from November. Central Vietnam can experience periodic rain showers from September through to January, with the wettest months being December and January. Temperatures start to rise with August normally being the hottest month.

The south of Vietnam has a dry season from December through to April with a rainy season from May to November. This is often known as the ‘green season’, due to the lush and tropical landscapes created by the rains.

Cambodia
Cambodia tends to have little seasonal temperature variations with an average of 28°C (82°F) across the year. During the dry season from October to April, expect early starts for visiting Angkor Wat so that you can relax poolside during the main heat of the day. Influenced by the south west monsoons, the wet season in Cambodia is from May through to October. Rain can be heavy from July through to September, but visitors during this time get to experience the temples without the crowds. Also with the temple moats full, it’s a perfect time for some reflective photography.