The Angkor Temples, a place of myth and legend 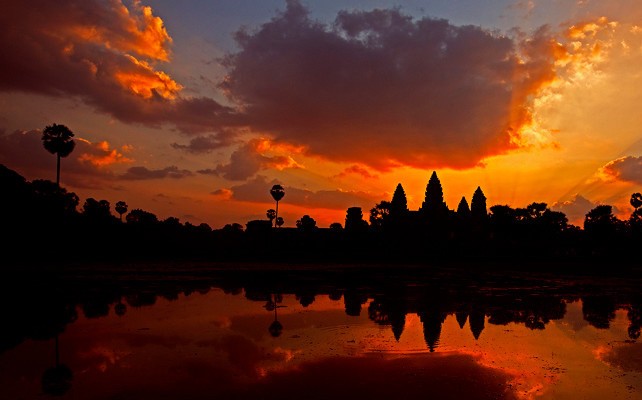 There can be few more instantly recognisable places in the world than the Temples of Angkor. Here, more than a thousand different religious buildings cover an area the size of more than a hundred and fifty square miles, so on your Avventura Travels tour you’ll quickly see the benefits of exploring the site by bike.

There is a timelessness about this place. Surrounded by ancient temples, themselves enveloped in jungle, visitors to Angkor often describe experiencing a deep and unexpected sense of spirituality. The site was constructed for religious purposes, after all, so that was absolutely the intention of the builders. Strangely for one of the world’s most desired places to visit it is possible to feel quite alone and still here at the busiest of times. While Angkor is visited because of man’s impact on the landscape in the form of the great temples, the importance of nature to the experience cannot be overstated. Approaching in darkness in readiness for sunrise the parrots and monkeys awaken in the jungle providing an eerie soundscape to the experience.

Angor was once a great city, capital of the Khmer Empire which was ruled from here from the ninth to the thirteenth centuries and from where Laos, Burma, Thailand and southern Vietnam were all governed. At its height Angkor was so huge that one in every thousand people in the world lived there. Considering its antiquity the sophistication of the architecture shows what an important place this once was. Networks of canals and reservoirs, all excavated by hand, crisscross the site, bringing drainage and fresh water to the million city dwellers. It is still inhabited today with locals earning their living from the land cultivating rice in the way their ancestors have done for hundreds of years.

The temples are all highly decorated with complex depictions of various gods and also of daily life. For example, the Bayon has incredibly detailed bas-reliefs showing things as mundane as families making dinner or drinking, women giving birth, people labouring in the fields and men marching off to war – or being brought home from battle in coffins. The extravagance of the decoration of Bayon is testament both to the ego of King Jayavarman VII who had it built and also to its significance within the city. It was completed nine hundred years ago when the Khmer Empire was transitioning from a Hindu to a Buddhist state and its design is a grand political statement to that effect. Fifty-four impressive Gothic towers are adorned with 216 enormous grinning faces and three-quarters of a mile of bas-relief carving of more than 11,000 figures. Just like the great Gothic Cathedrals being constructed around Europe at the time, Bayon and its neighbouring temples were designed to impress and inspire awe. Reflections not just of religious observance but of state power, it’s believed that the fifty-four towers each represent an administrative province of the empire. If a king could build great temples like these, what could he not do?

Ta Prohm, the “Tomb Raider Temple” symbolises man’s endless war with nature. The romantic vision is of a giant structure being devoured and re-assimilated by the voracious jungle growing over and around it, struggling always to consume it forever. In reality, the tendrils and roots of the trees are kept carefully under control to protect Ta Prohm and keep it accessible to visitors. However it’s easy to imagine that the whole temple complex must have looked something like this when the first Europeans discovered the city. The trees which appear to be devouring it are the Kapok or silk cotton tree and the aptly named, strangler fig. Rare for Angkor temples, there is an inscription on one of its walls which gives a clue as to the hive of activity the city once was. It says that almost 80,000 people worked on or at Ta Prohm including more than 2,700 officials and 615 dancers. As you pick your way through its narrow corridors and closed courtyards you will discover paths blocked by fallen stonework eased out of place by tree roots and you really can imagine you are, like Lara Croft, the first person to explore this ancient structure for centuries. However, it is one of the buildings here which has actually been in continuous use throughout its lifetime and is still a place of worship today.