Meet the inhabitants of Seal Island 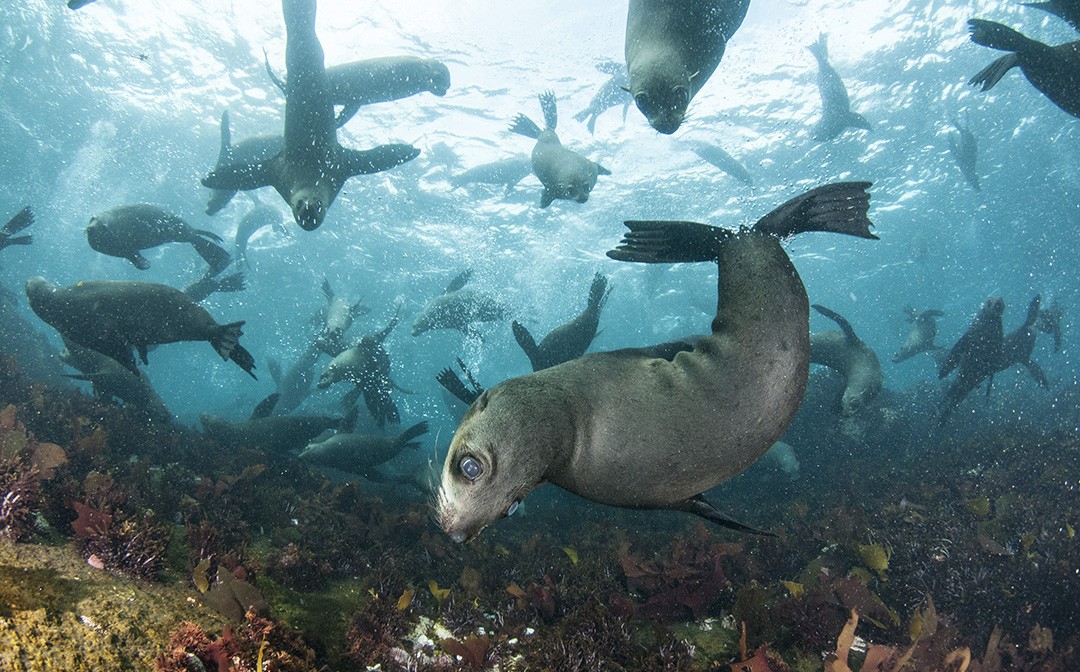 Seal Island couldn’t really have ever been called anything else, except it is. Its real name is Duiker Island and it sits off Hout Bay near Cape Town. A remarkable 7,000 Cape fur seals sometimes cram onto this tiny rock which is only marginally bigger than a football pitch. A solid lump of granite, it rises only a few feet above high tide. As if not crowded enough, the island is also home to a number of seabirds including numerous gulls and cormorants.

Adult male seals generally grow up to about seven and a half feet long and weigh in at up to fifty-five stone. The males enjoy large harems of breeding females of sometimes fifty or more. The seals have developed a clever evolutionary trick to give their pups the best chance of survival. They can delay fertilisation after mating for up to three months to make sure they give birth at the beginning of summer (late November/early December), avoiding the coldest weather. The dark-furred pups are about three months old before they’re ready to take to the water and abandon their mother’s milk for their favourite food of anchovies and pilchards, although they’re able to live on a wide variety of prey including shellfish or even seagulls and penguins. They can dive to two hundred metres (more than 650 feet) and have incredibly good eyesight at such depths. Two layers of fur protect them from the cold; a hard, bristly outer layer and a soft under-fur which made them so prized by hunters. While the seals are safe from man today there are other predators to consider and area around the Western Cape is a growing attraction for great white sharks.

Snorkelling with the seals you will find they swim around you, going about their business without concern for your presence. They are not at all tame or trained but are inquisitive and if you’re lucky they may decide to play in the water with you. However, the animals’ welfare is always the top priority for the snorkel team which is involved in a number of research projects and other initiatives designed to encourage these beautiful animals to thrive.

The environmental disaster of plastic infesting the oceans also causes problems for the seals here and, when possible, members of the team will go into the water to free trapped animals. They also organise and help with regular beach clean-ups and have collected lorry loads of plastic over the years. Seal pups sometimes slip off the rocks when they have not yet learnt to swim and are likely to drown if not rescued. On one occasion team members saved an incredible hundred pups in one day.

You can be fully confident that your Avventura Travels meeting with the seals is done with the animals’ best interests in mind. The snorkeling excursions here were the brainchild of internationally renowned zoologist and underwater photographer, Steve Benjamin. By visiting the seals you could actually be contributing to a major research project currently underway which is examining the way the seals interact with humans. It’s hoped the research will inform future adventures, making sure they are absolutely as harmless or even beneficial for the animals as possible.