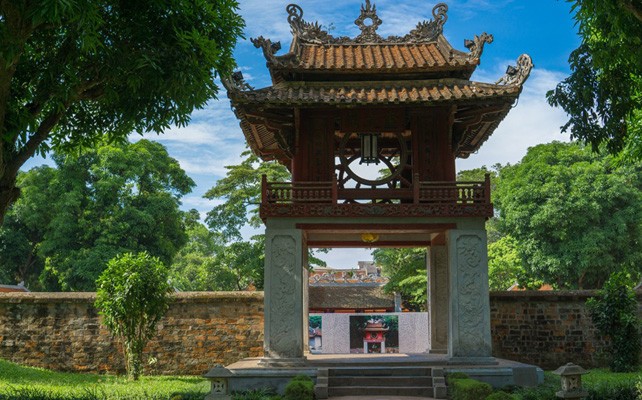 It is fitting that your Avventura tour of Hanoi should be taken in the seat of an open-top Jeep as used by the Soviet and Vietnamese armies of the 1950s and 60s. The city’s inhabitants have seen Mongol, Khmer, Japanese, French and American troops marching through its streets, and war and a military philosophy have been fundamental to the shaping of Vietnam for centuries. According to the respected City Momentum Index, Hanoi is the third fastest growing city in the world, with the population rising by about two and a half thousand people per day. The city on the banks of the Red River is one of the oldest capitals in the world. Atmospheric colonial buildings rub shoulders with ancient pagodas, fascinating museums and ultra-modern skyscrapers. Known for its fabulous food, its buzzing nightlife and its multicultural feel, Hanoi is a city of excitement and tradition, of ancient beauty and cutting edge culture. Hanoi assaults the senses like few other places. Horns blare and engines rev as hordes of scooters buzz around the streets in every conceivable. Somehow dodging through the two-wheeled traffic, countless buses propel themselves every which way as their passengers absorb the sights, sounds and smells which assail the senses at every turn.

The Ho Chi Minh Mausoleum is a place of national commemoration where people can visit the founder of modern Vietnam as he lies in state. The young Ho Chi Minh travelled all over the world and wherever he went, Britain and France, China, the United States and the Soviet Union, his experience of different movements and social groups shaped his plans for Vietnamese independence. He released the declaration of independence in 1945 and although he died before statehood was achieved, he is remembered as the father of a modern free Vietnam. The mausoleum can lay claim to being the country’s most revered national monument. The structure is more than seventy feet high and a hundred and thirty-five feet wide. Built of granite it was modelled on Lenin’s tomb and has a very similar feel to Eastern European Soviet-era buildings. The difference is in the elements of Vietnamese styling in the design including the sloping roof. The well-travelled former leader still makes an annual pilgrimage to Moscow for his body to be maintained. When you come to see his glass sarcophagus it is important to remember this is a place of great reverence for Vietnamese people and you are respectfully requested to cover your legs and stand silently in pairs with no crossed arms or hands in pockets permitted. “Uncle Ho” as he was known is displayed under dim lighting in a carefully temperature-controlled, cool environment and guarded day and night by members of the Vietnamese armed forces. The mausoleum has an atmosphere of reverence and respect and can make the visitor feel quite reflective. The captivating gardens surrounding it are a tribute to national fauna with two hundred and fifty different plant species from all over the country on display.
The feeling of tranquillity and reflection continues just over two hundred yards away from the mausoleum at another of Vietnam’s most iconic structures, the One Pillar Pagoda. This highly unusual-looking building was built a thousand years ago by the childless Emperor Lý Thái Tông. The emperor had a dream where a Buddhist deity, seated on a lotus flower had handed him a baby. Shortly after this dream, he married a local peasant girl who bore him a son and heir. In gratitude, the emperor built the temple on a lake to represent his joy emerging from a sea of suffering. The wooden structure is built around a pillar cut from a single piece of stone, four feet wide and thirteen feet tall. Local people come here to pray, especially those who are hoping for children. In 1954, retreating French forces badly damaged the pagoda as they fled Vietnam but it has since been carefully and authentically restored. The lake teems with carp and there are many trees to sit under and enjoy the shade while admiring this beautiful building.

A short Jeep ride away is the Vietnamese Museum of Ethnology which aims to explain to visitors the contributions made to the country’s culture and society by each of the fifty-four different ethnic groups which make up its population. The Museum is like a hymn in praise of the beauty of Vietnamese culture. It is a sensual celebration of a civilisation which has witnessed and experienced so much but which today has a strong sense of self. Nowhere is this more true than in the outside area where ten entire buildings have each been constructed in the styles associated with different cultural traditions. When you go inside them you can begin to imagine what it would be like to live there. Inside the exhibits are arranged by themes including clothes, jewellery, agricultural tools, fishing gear, weapons, household items, musical instruments, religious and ceremonial artefacts. The museum is a centre for research as well as a highly popular visitor attraction and its mission is not just to catalogue and research the unique strands of Vietnam’s ethnic melting pot but to help preserve their diverse influences.

Your Avventura Jeep tour of the wonders of this ancient city now takes you to one of its greatest jewels, the Temple of Literature, built on the site of Vietnam’s first University. The Temple has remained very much as it was planned a thousand years ago and is split into five courtyards, each with a different role to play in the education of princes and high ranking court officials. The Temple is set in beautiful manicured gardens and is often used by students today for graduation photos, such is the regard with which it is held in terms of the history of education in Vietnam. This incredibly tranquil place was intended to teach and honour the works of Confucius, the Chinese thinker whose ideas continue to influence modern philosophy today more than two and a half thousand years after his death. There are many beautiful altars and statues, especially the famous stone turtles with giant memorial tablets on their backs commemorating the works of great scholars. As you look around amid the calm and tranquillity it is easy to imagine them, walking the grounds in their traditional academic gowns, pondering the mysteries of the universe and studying scrolls of ancient wisdom.