Barranquilla Carnival – the party of your life 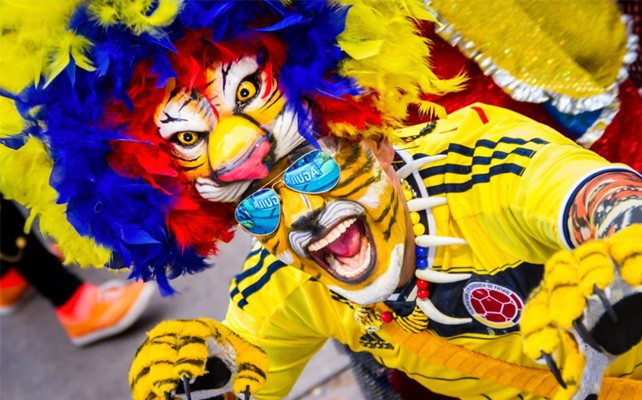 Carnaval de Barranquilla is second only to the event in Rio de Janeiro in Brazil but for many people it is the truly authentic people’s carnival. The slogan for this four day festival is “quien lo vive, es quien lo goza” which means “those who live it are those who enjoy it.” People who’ve been to both these huge events often say Rio is designed for visitors while Barranquilla has much more of a community feel.

The carnival is a product of an incredible cultural melting pot with influences from Africa and Europe as well as those from Colombia. How and when it began is a mystery, but it’s known to be at least seven hundred years old and is believed to have started as a holiday for slaves, today combining elements of pagan and Catholic ceremonies. Whatever its origins, carnival today is a blur of sound and colour, with music and dance and a wild party at the heart of everything.

The carnival has been recognised by UNESCO as one of the Masterpieces of the Oral and Intangible Heritage of Humanity, which recognises the most important cultural events all over the world. It’s a royal event, each year crowning “King Momo” and his queen. At the start of the event the Queen receives the keys to the city and gives a royal decree for everyone to go out and party. The royal couple have an entire court. The marimondas wear elephant trunk masks, floppy ears and vibrantly coloured suits and are the carnival clowns. No folk event would be complete without a bit of gore and El Descabezado, the Headless Man, can be seen menacingly brandishing a machete at the crowds. There’s María Moñitos with her bright red lipstick and multicoloured hair who will flirt with you as she moves among the crowds randomly kissing spectators and Juana La Loca who behaves as if deranged, dressed in rags and carrying a weapon in the form of a rock wherever she goes. The carnival ends each year on Shrove Tuesday and is symbolically killed off in the form of another character called Joselito whose coffin is borne by marimonda pallbearers. The parade splits into two groups; mourners dress in black or white while the rest of the colourful crowd continue to party. Finally, the Mayor of Barranquilla gets his keys back and the festivities are over for another year.

If you want to see how some of the spectacular costumes are made you can visit The Casa del Carnival in Barrio Abajo which is open all year round, and see the costume makers at work preparing the outlandish clothes and displays for next year. Local musicians also use the Casa as a rehearsal space as nothing is left to chance when it comes to putting on a great show.

You will never experience anything quite like the carnival so it’s worth giving some thought to what you will wear to get into the party mood. Colourful clothing is highly recommended, but beware, you’re likely to be doused in flour and sprayed with foam, so treasured items are probably best left in your hotel.

The 2020 Barranquilla Carnival can be added an extension to the 8th February departure with Avventura.